If you are trying to eliminate winter hay feeding because of production and labor costs, you are not alone.  Most producers would like to do away with such costs completely but that is simply not practical in most cases.

While winter hay feeding cannot be done away with entirely, there are ways to reduce such costs.  The first is to accurately estimate the cost of production.  By doing so, you can figure out the most cost-efficient way to bale your hay.  Your options will essentially come down to baling your hay with your own equipment, having someone else bale it for your, or purchasing it.  While there are specific formulas for figuring out exact production costs, every producer will have a different outcome based on their unique situation. 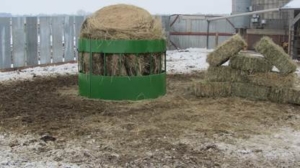 Another way to reduce costs is to cut down on hay loss and waste.  Experts have found that using round bale feeders when feeding round bales reduces hay loss.  Such feeders also will maintain the quality of the hay by protecting it from being trampled.

While lowering production and labor costs of winter hay feeding is important, efficiently feeding cows also is important.  That’s because the body weight and energy of cows will be increased when winter hay feeding production is well managed, increasing ending weight, backfat depth, and body condition score.  When inefficient hay feeding methods such as feeding on the ground are employed much of the hay will be spread apart and trampled, lowering the intake quality.

The design of particular hay feeders also have been shown to reduce feed losses.  Experts advise providing enough distance between the outside of the feeder and feed; avoiding bars between feeder stations; and providing a comfortable feeding height.  Cone feeders prevent hay from molding on the ground.  The cone allows a space for the animal to eat underneath the bale preventing the animal from removing their head from the feeder to eat.  Further, it is recommended that new bales be placed in the feeder only when there is less than 10 percent of the existing bale left.  This forces the cows to eat the majority of the bale while making sure there is enough room for the new bale.

There are several other ways to reduce winter feeding costs, including the use of supplements and limited feeding.  However, it is essential that these methods be employed only after consultation with a ruminant nutritionist or extension agent since, if not done correctly, will do more harm than good.  In the end, efficiently baling your hay and using the best hay feeding methods available will go a long way toward cutting your winter hay feeding costs – without hurting your livestock.